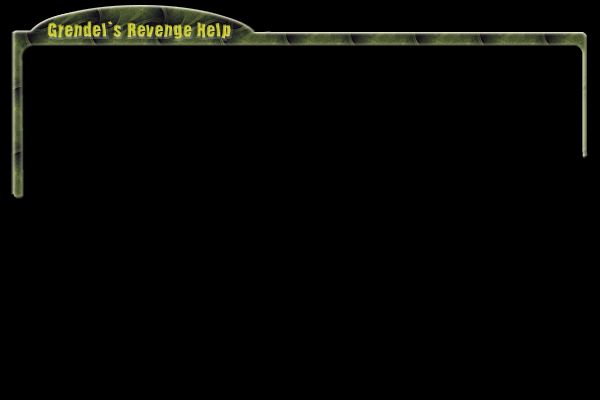 This tutorial is intended to cover the basics of the Grendel's Revenge, and provide new players with an overview of the things they should know when creating a character. Further detail is available within the Monsters help system, accessed in game through using the help command.

In Grendel's Revenge you take on the role of a monster. You can be one of two types of monsters - social monsters, who band together and live in lairs; and wandering monsters, who roam the countryside alone (usually wreaking havoc).

Your monster can be one of three different castes - undead, humanoid, or chimera. Each caste has its own strengths and weaknesses:

Each caste is further divided into races. There can be both wandering and social monsters of any race, but in general those who wander have separated themselves from their more social cousins, and their lifestyle has drawn boundaries between them and the rest of the world. A wandering monster can never become a social monster again, and vice versa.

While everyone uses the same mechanics, the game has a slightly different focus for social monsters than it does for wandering monsters.

Social monsters tend to be weaker on their own, but are often found in greater numbers. For players, the benefits of playing a social monster come in the bonuses for banding together to form a clan, and the ability to build a lair to support these social bonds. Each social monster can specialize in a different role within their clan - leader, warrior, shaman, builder, or magical (which incorporates abilities such as hurling fireballs, turning incorporeal, or flying). Social monsters can also, to varying degrees depending on their role in the clan, such as command their grunt cousin, construct lairs, lay traps, initiate battles, or just hoard resources. Individually, social monsters cannot become that powerful, but as a clan they can become one of the strongest forces in Uthgol.

Social monsters, by definition, have social relationships, also known as "grumbles." The primary relationship that they have is the master/minion relationship. Any role can be a master - all it takes is inviting another player to be your minion, and having them agree - but only Leaders can start or run a clan.

Once a Leader has ten minions - which may be both direct minions and any of their minions in turn - they can start a clan. These ten minions must include at least one shaman, and at least three builders. The new clan can then start building their own lair, if they have gathered enough resources and given them to the builder to construct the entrance.

A new clan can also be formed by defecting from an existing one. When a leader defects from their previous clan, they take all the minions in the hierarchy below them, though these minions can of course defect back to the original clan should they desire.

Important to all clans are resources. They are needed to build and maintain structures, pay the living expenses of players (usually the clan Leader's responsibility), and for various other activities. There are two basic resources, gold and stone, and three resources specific to particular castes, shadow for Undead, iron for Humanoids, and mana for Chimera. These resources are gathered the non player character works of the clan, called grunts, from resource deposits that the clan controls, and stored in the clan treasure houses (always a prime target in raids by other clans).

All monsters progress by accumulating Grendel's favor, through activities such as combat, building, healing, and leadership. This favor can be applied to various things, including increasing your attributes, increasing your special abilities, or even improving your lair structures. Favor can also be traded for karma points, and social monsters can use these karma to lessen the penalties for an untimely death.

A social monster's role with its clan is of great importance to it. When you create a character you choose one of the five roles for it, and optionally a subtype within that role as well. Your role determines not only the part you will play in your clan's daily life - defending it from its enemies, building its structures, etc - but determines the special abilities available to you. It is possible to choose two roles when you create a character, at the penalty of reducing the level of special abilities available as well as how high you can advance in these special abilities. It is further possible to choose a subtype within a role - it is possible to be many different types of Leader, such as a Tyrant, or a Chieftain, or a Diplomat. These role subtypes will further specialize your abilities.

Wandering monsters work a little differently. Their primary pleasure in life is to terrorize the landscape, fellow monsters, and the pink-skins. They are nomadic, living without the familiar comfort of a clan (though they can join grumbles) and live to hoard resources for themselves, believing this sharing thing is a pink-skin plot designed to destroy a monster's world from the inside.

Like social monsters, wandering monsters improve themselves by accumulating Grendel's favor - through activities such as, attacking lost adventurers, raiding clans, and being a general nuisance - and they can spend those favor points in similar ways to social monsters, improving their abilities and attributes. They can also spend any karma points they trade favor's for in a similar way, to stave off the penalties for death.

When they have accumulated enough karma, however, they can instead choose to reincarnate as a different type of monster when they die. There are seven tiers of monsters that a wandering monster can reincarnate into, each progressively more capable than the previous ones. Each tier has a cap that limits the wandering monster's attributes and abilities, but that cap goes higher as they reincarnate into better monsters. Reincarnating as a new type of creature involves forgoing the special abilities and some of the attribute upgrades you previously enjoyed, though you do start with the new abilities inherent in your new form, as well as a number of bonus favors.

Combat being one of the primary activities in Uthgol, most monsters expect to die quite often, though there are ways of capturing monsters and holding them for ransom.

Death is not the end though, for when you die you can return to life, often somewhat the worse for wear, but safe in your home. If you are a low level, there is no penalty for dieing, but beyond that you will lose resources and items. If you are carrying any items (i.e. items you are not using) then you will randomly lose one item from your inventory. Worse, you will also lose precious favor points needed to gain that next attribute bonus or skill rank. However, do not fret. By spending karma points you can reduce the penalty from death by expending karma points while spending time in purgatory.